Some rules of creating the content for digital signage

The content should be adapted to media and support on which it will be diffused.

There are many rules, some of them describe Bill Gerba on his site of http://www.wirespring.com/dynamic_digital_signage_and_interactive_kiosks_journal/index.html

Whether you're making a five-second station ID message or a 30-minute long-form segment, sooner or later you'll have to come to grips with two challenges.

This can be frustrating for designers who count on their audience watching a clip from start to finish in order to get the gist of it. It's even worse for the viewing audience, who are left with bits and pieces of content that have no meaning without context. 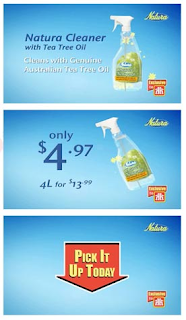 Six steps to better composition, people are still over-thinking how their pieces should work. We continue to see highly complex spots that, while produced with very high production values, demand too much viewer attention for far too long to be viable in the field.

While there's no guaranteed, 100% effective solution to this problem, we've found one approach to be extremely useful: treat the clip as a series of scenes and shots. Just as a movie director composes a film from numerous small pieces, effective digital signage content can be constructed from segments designed to catch attention and relay some information quickly -- sometimes in a mere second or two.

To maximize the chance of getting your message across to an increasingly distracted audience, try to remember that digital signs work more like posters than TV.

We recommend the following procedure when going from the idea phase to the production phase of your content creation process, which is kind of like storyboarding in reverse:

For example, think about what a movie poster might look like for the message "Tide gets your whites whiter!" Each mini-poster should stand alone -- i.e. poster #2 shouldn't depend on content from poster #1.
If you're using a voiceover or other dialog, try to segment it into sound bites that go along with each poster instead of using a single, contiguous speech.
Assemble related "posters" together into scenes with transitions and segues that link them together, but don't make them depend on each other.
Finally, assemble the scenes into your finished spot.

The audience wants an interactive TV - is this a future trend for TV, Internet?
Judging by an Ensequence -sponsored study of US adults conducted by Harris Interactive in November and December 2007, many TV viewers are ready to use their remote controls for more than just adjusting the volume.
More than seven out of 10 respondents said they were currently using their remote controls with on screen TV guides, scheduling or selecting DVR recordings and for viewing content on-demand.

Respondents also indicated a desire to interact with a range of programming, including sports, scripted dramas and even advertising.

"This study confirms that consumers have higher expectations and want to vote for contestants, get additional product information during commercials, purchase tickets for live events or get scores and statistics during sporting events—all using their remote controls," said Dalen Harrison, CEO of Ensequence.

Some purposes of digital signage

Here are the main purposes of digital signage accordingly to Wikipedia


Environment enhancing - such as using digital signage to increase the customer experience with the building itself, examples of this are where digital signage panels are used on the floor and react to how and when an individual moves over them 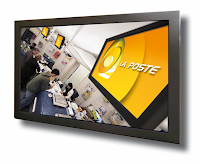 
Digital signage can also be used in a corporate environment, for example by disseminating information throughout a company via screens in reception areas and canteens. 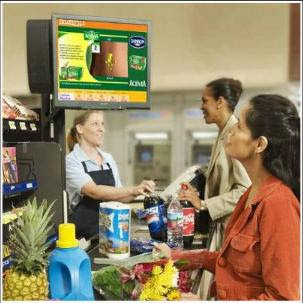 Digital signage is a form of electronic display that is installed in public spaces. Digital signs are typically used to entertain, inform or advertise (together known as "adfotainment"). Major benefits of digital signs over traditional static signs are that the content can be exchanged more easily, animations can be shown and the signs can adapt to the context and audience, even interactively.
Digital signage advertising is a form of out-of-home advertising in which content and messages are displayed on digital signs, typically with the goal of delivering targeted messages to specific locations at specific times. Digital signage offers superior return on investment compared to traditional printed signs 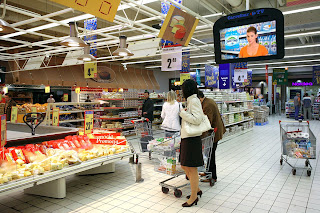 The content displayed on digital signage screens can range from simple text and still images to full-motion video, with or without audio. Some operators of digital signage networks, particularly in the retail industry, regard their networks as comparable to television channels, displaying entertaining and informational content interspersed with advertisements
These dynamic displays are often used to present a custom-tailored mix of informational and advertising content, including product promotions, timely news, and upcoming events.
Digital signs are frequently located in crowded public venues, so the screens and content need to stand out. With this in mind, digital signage networks were early adopters of large-screen LCDs, plasma monitors, front/rear projectors, organic LED (OLED), and holographic and 3D imaging technologies.Most digital signs are mounted on a wall, ceiling, shelf, or endcap, but the creative use of display technologies has led to innovations like polarized projection film. This lets you project high-contrast images onto store windows or displays that appear to float in mid-air
This is an example of deployment of digital signage in WalMart USA.