I'd like to present to you one of the biggest European transmedia projects: "The Spiral".  This participative drama series was coproduced by 7 broadcasters, and a five-episode participative TV series was broadcast in September 2012 across Europe reaching more than 2,5M viewers.

"The Spiral"  started with a burglary where six major works of art  from six different countries were stolen. Arturo, an enigmatic artist who heads an art community called The Warehouse was behind it.  The thieves invited everyone to search for the paintings, hidden deep in www.thespiral.eu. You could simply enjoy the thriller series on TV or experience the story through the game, the online community and the physical events.

Peter De Maegd, producer and story architect of "The Spiral", reveals how this gigantic project was born and the challenges he faced.

Interview with Peter De Maegd, story architect and producer of The Spiral

Peter De Maegd is an independent film producer who focuses on the new opportunities of converging media. Over the last decade, Peter was involved in the production and marketing of over a dozen feature films. With his company Potemkino he focused on innovative projects and formats like "Where is Gary?", "Miss Homeless" and "Jean Wordt Vlaming". He also collaborated for a few years with Caviar Films. Peter gives lectures on storytelling for Converged media.

Excerpts:
How was the idea of "The Spiral" born?

They brainstormed with other broadcasters and focused on two questions:
-What story theme pleased viewers across Europe? The response was crime.
-What setting brings together characters from different countries in a harmonious way ? The response was an artistic setting within Europe.
That's how the concept was born: 6 artists from 6 countries living in the artistic community and stealing art.

Concerning the participative part of the project, an audience was invited to recover the paintings by hunting for them. Additionally, some of the artists were killed during the process, so the series became a crime series.
The answers to these 2 simple questions enabled us to create the core of this project.
And I joined the project at this stage of development. 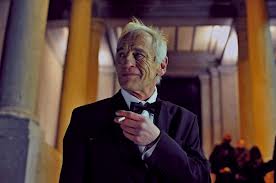 Thus the idea of coproduction was present  from the beginning of the project. How did you find other broadcasters?

SVT and VRT brought three additional partners to the table. We needed a sixth broadcaster to make it work. And after a lot of legwork and lobbying, we got two more broadcasters who teamed up: TV3 in Denmark and ARTE for France & Germany.

You were the story architect for "The Spiral". How did you develop the transmedia experience?

We already had a strong idea from the start which was to introduce Larping ("Live Action Role-Playing", a form of role-playing games where the participants physically act out their characters' actions). Then we started to analyze the project with the participation parameters. We decided to open the participation to a higher level of involvement, knowing that fewer users would be involved at the beginning. The Larping  was done by Martin Ericsson who also did “The truth of America" produced by SVT.
We asked ourselves : What would happen if the story on TV were real? How would that play out online and in reality? We went through the script noting a long list of things and after that we defined which elements we could develop, adding in the participation parameters in a way that would build a coherent storyworld in relation to the TV series.

What other platforms did you use?

www.thespiral.eu was our main platform. It was a point of entry into our story world and we had 140 000 visitors there. Another point of entry was the Warehouse community, which was only active online. Then we had a Twitter channel, Facebook groups such as TheSpiral EU and The Warehouse, games and the physical events.

What was the audience participation? Could you give us some statistics?

We had 4 phases of our community growth. The first one involved building the online Warehouse community as it was a real community. That was done with about 40 selected and experienced LARP’ers. This stage wasn’t public.

In the third phase we launched a game on the 21st of August 2012 and we stole the painting.  We actually removed 6 paintings from 6 different museums and we organized press conferences.
In the game people could find additional information about "The Spiral" such as why there are 6 missing paintings, etc.

During the last phase we broadcast the series on TV. The TV series helped the online players to understand the plots in the game so they could be one step ahead.
Moreover, we followed the logic of reality so if a painting  was found by internet users in Gotland, it really appeared in this place.

One hard question that many producers face: What was your business model?

The game and multiplatform approach accounted  for almost 10% of the total funding  and was separated from the funding  for the TV production.

Concerning the investment per source, one third of the investments came from the broadcasters. However, since it was a coproduction, this participation could be higher and reach as much as 50%.

Another third came from partners such as the Dutch Film Fund, and the European Media Program (Interactive Works and Media Broadcast support).
The Media Interactive Works Fund was extremely important for us because it gave us necessary investments for the long phase of development for this project which lasted 2 years. Once Media Broadcast support came in, the broadcasters were convinced that this complex project was going into production because they knew how difficult it is to obtain this kind of support. The combination of these two funds permitted us to build a new financial model.
A quarter of our funds came from the Belgium tax shelter and the remaining 8% came from our own investments and presales.
What did you learn from this experience?

The main lesson we learned from this project  was that we integrated the social networks too late in our communication strategy (starting in May 2012). We therefore missed out on many opportunities to communicate about the story.
From the beginning we wanted to build a story as it was real, with paintings that disappeared from the museums. So we thought that if we wanted to create a suspension of disbelief across multiple platforms, we should not communicate about the story and simply leave people free to explore it. In fact, as people want to believe, the only thing that can damage their suspension of disbelief is bad storytelling, bad acting and inconsistencies.

If you could change something in this project, what it would be?

First of all I would have started communicating about the project already during the development phase and use this opportunity to build momentum for the fiction story.
Secondly, I believe we should have one person on board who represents the 7 broadcasters. Since we didn't have this person, each time we had a major discussion, I had to contact each broadcaster. This was a major weakness in our very complex organization. Now I know that when you have a coproduction you should have one team member from the broadcasters who represents all of the broadcasters. In this way you can communicate efficiently. Moreover, I was the only person who knew exactly all of the details regarding the project and that created a bottleneck effect at some points.

Where can we find "The Spiral" today?

In France you can find it on Arte. And it will be released on DVD soon.  We will also upload the behind the scenes on our website.
We recently posted a 5 minutes case study video on  http://www.thespiraltheseries.com.  And we plan to upload the video of the presentation that I gave at Power to the Pixel (in October 2012) .

What can I hope for you now ? What is your next challenge?

The next challenge is pretty simple: to use the network and the know-how that I have acquired and to work towards new projects. Innovative projects such as Jean Saves Europa which is a participative documentary series based on Jean Becomes Flemish and of course we’re looking into a second season for The Spiral.

I'm also working on a horror movie and we plan to do something very specific with it: to do a crowdfunding by selling some traps around which the story is built. You can follow the project on Facebook:  WELP project https://www.facebook.com/CUBthemovie?ref=ts&fref=ts
Publié par Digital Strategist International Transmedia Coordinator à 09:53